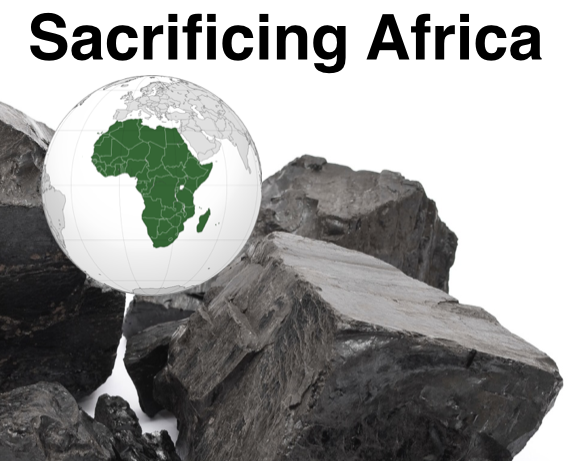 Those of you who know me know I feel the highest use of technology is to alleviate the suffering of my fellow human beings.  I've previously shared here that the two parameters most impacting quality of human life on this planet are: (1) social stability (peace); and (2) access to abundant, affordable, and reliable electricity.  Think of all the ways we use electricity.  We "flip the switch" and we're shocked if the lights don't come on.  We rarely think about the "around the clock" duty our home and office space conditioning equipment is serving.  We turn the faucet and we're surprised if clean, clear water doesn't immediately issue forth.  Then there's our internet service, cable TV and, of course, our cell phones.

I discussed in Post # 94 the plight of those living today in Africa in terms of their prospects for a quality of life most of us in the "developed countries" take for granted.  Put bluntly, their prospects for a life you and I would want for ourselves and our children are very dim - literally.

In Post # 94, I pointed out that a heartless and unthinking push to globally decarbonize electricity could doom hundreds of millions – probably well over a billion – of our fellow humans to a life of misery.  Why?  Because low-carbon means no coal-fired electrical generation - the one source most likely to enable African nations to bootstrap themselves into the modern world.  Don't get me wrong.  I know coal is dirty.  I lived the first ten years of my life in a home heated by a coal-burning stove in rural East Tennessee.   I prefer nuclear power to coal-fired power - all things being equal.  But often, all things aren't equal – particularly in undeveloped countries.

I want to expand my discussion in Post # 94 by sharing some numbers I calculated this morning to quantify the mass of humanity whose lives are at stake in this argument...

I began with World Bank Data (here, here, and here), detailing country-by-country access to electricity for the nations of the African continent.  I chose to focus on Sub-Saharan Africa, whose total population was around 800 million souls in 2007 and is approximately 1.1 billion today.  A new report from the Population Research Bureau, predicts the population of this region will double by 2050.

I selected 25 countries, whose combined population in 2011 totaled 743 million or about 75% of the (then) population Sub-Saharan population.  For those interested, the countries on my list were:


Nigeria leads the nations on my list in terms of total population (164M in 2011).  Four countries on the list have (had) populations exceeding 50M (Nigeria, Ethiopia, Dem. Republic of Congo, and South Africa).  Tanzania probably has a population of 50M today.

Now for the shocking results:

Think of it... half a BILLION human beings without electricity – just in Sub-Sahara Africa alone!  That's close to the entire population of the US, Canada, and Mexico combined...

Men, Women, Boys, and Girls.  The aged and infirmed.  Newborns and toddlers.  People who have dreams of a better life for themselves and for those whom they love.  People just like us.

Whatever approach to global carbon management we take, we have a moral obligation not to pursue an agenda that dooms a billion people to a life of squalor, sacrifice, and suffering without electricity. I'm pro-nuclear.  But, as I discussed in Post #94, nuclear power simply isn't a good near-term fit to the ground reality in some circumstances.  As dirty as they are, fossil fuels have an important role to play in the here, now, and near-future – especially in underdeveloped countries.  Creating extra barriers for hundreds of millions of our fellow human beings who desperately need electricity, while those of us in developed countries sit in air-conditioned offices with high speed internet connections, drinking our favorite thermally-tailored drink, promoting and even dictating a low-carbon energy future, is cruelty – plain and simple.  And cruelty in the name of a low-carbon agenda (no matter how noble the goals) simply cannot be condoned or supported.

So once again I echo the sentiment of a growing number of pro-environment technologists who say...

We must not sacrifice Africa on the altar of a low-carbon agenda.

Post # 95: Now Showing – The Canary, The Ostrich, and The Black Swan 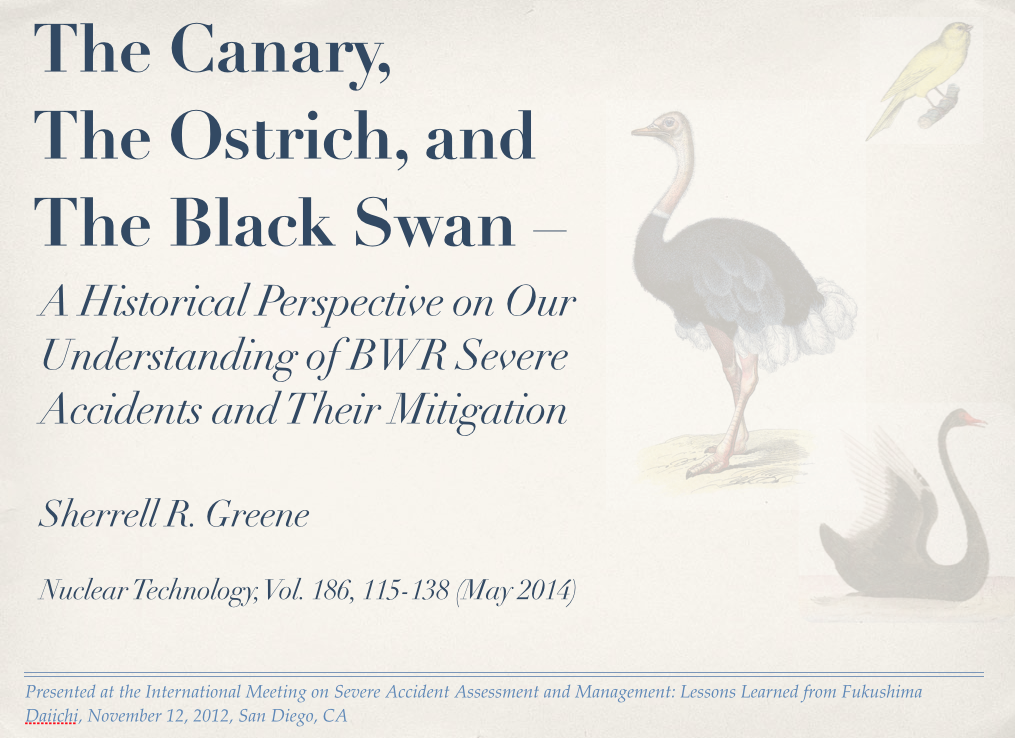 Finally, after a year and a half, my complete paper, "The Canary, The Ostrich, and The Black Swan: A Historical Perspective On Our Understanding of BWR Severe Accidents and Their Mitigation," is on the street.  Check it out in the May 2014 issue (Vol 186, Number 2) of the American Nuclear Society's Journal, Nuclear Technology.  The abstract...

Between 1980 and 1995, Oak Ridge National Laboratory (ORNL) was engaged in an intense effort to understand commercial boiling water reactor severe accident phenomenology, severe accident progression, and the potential role of the reactor operator in severe accident mitigation. This paper presents a summary of the major findings and conclusions from that period. Both detailed accident- and plant-specific results are discussed. The author, who was a member of the ORNL research team that performed the work, offers a historical perspective on lessons learned, lessons ignored, and lessons forgotten from that period. The relevancy of these findings in the post-Fukushima world is addressed. The author discusses the evolution of the current risk-informed regulatory framework, and identifies some key questions to be addressed and critical steps to be taken to inform the development of the new nuclear safety construct required in the wake of the Fukushima Daiichi accident. Finally, the author closes by sharing an ethos of nuclear reactor safety that can guide a new generation of reactor safety professionals in the post-Fukushima era.
Posted by Sherrell R. Greene at 2:12 PM No comments: