Next Wednesday morning (November 1), I'll be presenting a paper on my concept of resilient nuclear power plants (rNPPs) at the American Nuclear Society's Winter Meeting in Washington, DC.

The presentation, entitled "Enhancing Electric Grid and Critical Infrastructure Resilience With Resilient Nuclear Power Plants (rNPPs)," is scheduled to begin at 1050 in the Advanced/Gen-IV Reactors – II Session.  The venue for the presentation is the Washington 1 Room in the Marriott Wardman Park.

The paper addresses the concepts of critical infrastructure and electric Grid resilience, the definition of a "resilient Nuclear Power Plant" or "rNPP", the primary attributes of an rNPP, the functional requirements of an rNPP, potential applications of rNPPs, and some potentially-enabling design features of rNPPs – all in the concise 20-minute timeframe allocated for the presentation.

I hope to see you there!  Let's talk resilience! 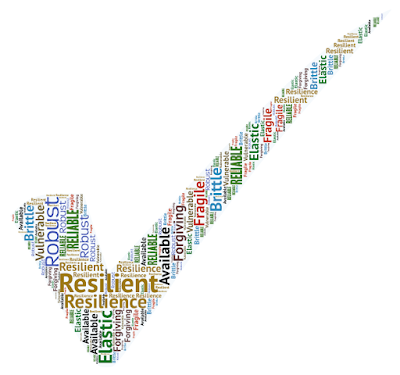 I briefly discussed the concept of a “resilient Nuclear Power Plant” or “rNPP” in my last post, and offered the following definition:

Thus, rNPPs are defined in terms of their impact on and value to the electric Grid – rather than their size, architecture, or the particular technology suite they employ.  rNPPs might be small and modular, or large and monolithic.  The could be cooled by light water, liquid salt, helium, or liquid metal.   They could employ a thermal neutron spectrum or a fast neutron spectrum.  (This is not to ignore the fact that certain combinations of plant and reactor size, system architectures, and technologies might be more enabling in terms of achieving rNPP functionality than other combinations.  These issues will discussed in future posts.)

So, beginning with the end in mind, and working "from the outside - in," let’s first examine the fundamentals of resilience…

“Resilient”.  “Resilience”.  What do these words mean?

characterized or marked by resilience such as:

a.    capable of withstanding shock without permanent deformation or rupture
b.    tending to recover from or adjust easily to misfortune or change”

1.  the capability of a strained body to recover its size and shape after deformation caused especially by compressive stress

2.  an ability to recover from or adjust easily to misfortune or change.”

But, what do the words “resilient” and “resilience” mean in the context of our nation’s Critical Infrastructure?

“Absorptive capacity is the ability of the system to endure a disruption without significant deviation from normal operating performance. For example, fire-proofing foam increases the capacity of a building system to absorb the shock of a fire.

Adaptive capacity is the ability of the system to adapt to a shock to normal operating conditions. For example, the extra transformers that the U.S. electric power companies keep on store and share increases the ability of the grid to adapt quickly to regional power losses.

Recoverability is the ability of the system to recover quickly – and at low cost – from potentially disruptive events.”

“…For the purpose of this study, critical infrastructure resilience is characterized by three key features:

Robustness: the ability to maintain critical operations and functions in the face of crisis. This can be reflected in physical building and infrastructure design (office buildings, power generation and distribution structures, bridges, dams, levees), or in system redundancy and substitution (transportation, power grid, communications networks).

Resourcefulness: the ability to skillfully prepare for, respond to and manage a crisis or disruption as it unfolds. This includes identifying courses of action, business continuity planning, training, supply chain management, prioritizing actions to control and mitigate damage, and effectively communicating decisions.

Rapid recovery: the ability to return to and/or reconstitute normal operations as quickly and efficiently as possible after a disruption. Components include carefully drafted contingency plans, competent emergency operations, and the means to get the right people and resources to the right place.”

Posted by Sherrell R. Greene at 9:41 AM No comments:

The interest in "resilient" critical infrastructure, and electric Grid resilience in particular, seems to be accelerating rapidly.

I've devoted much of my attention during the past two years to the study of electric Grid resilience and the role (current and future) nuclear power plants might play in enhancing Grid resilience.  During the next few weeks, I'll be sharing highlights here from a 110-page report I published in August [ATI-TR-2017-14, "Resilient Nuclear Power Plants (rNPPs) – Potential Building Blocks of U.S. Electric Grid and Critical Infrastructure Resilience"].  I will also be delivering a paper entitled, "Enhancing Electric Grid and Critical Infrastructure Resilience With Resilient Nuclear Power Plants (rNPPs)," at the upcoming American Nuclear Society Winter Meeting on November 1 in Washington, D. C.

Thus the starting point for discussing rNPPs is the definitions of "Critical Infrastructure resilience" and "electric Grid resilience" – two concepts that are surprisingly difficult to define in a quantitative manner that is useful from the engineering perspective.

I will discuss the concepts of Critical Infrastructure resilience and electric Grid resilience in my next post.

Some of you are probably wondering what happened to Sherrell.  No blog posts since February?  Really?

Without delving into the particulars, I'll just say I've been "head-down" in other pursuits – some of the fruits of which I'll be sharing here over the coming weeks.  Today, I'll simply set the stage...

I'm convinced the future of commercial nuclear power (at least in the western world) hinges on whether the nuclear power industry can improve its "value proposition" to society.

Although every one of the ~ 100 commercial nuclear power reactors built in the U.S. were constructed primarily as a means of providing safe, reliable, cost-competitive BASELOAD electrical generation capacity (and they have generally done so until relatively recently), it is highly unlikely the construction of future commercial nuclear power plants can be justified solely on the traditional baseload generation argument.  That argument is no longer sufficient or compelling.

I believe there is a compelling argument for more nuclear power; and it has nothing to do with baseload electricity generation, climate change, or industrial heat applications.

I'll delve into these questions in coming posts.

After a 33-year career at Oak Ridge National Laboratory, and 5 years in the private sector as an independent consultant, last Fall I re-entered the University of Tennessee in pursuit of my long-delayed PhD.  My research passion lies at the intersection of society’s dependence on electricity, electric Grid vulnerability, and the role of nuclear power in Grid resiliency (particularly with regard to so-called “Black Sky Events”).

I am pleased to announce my first peer-reviewed publication on the subject was recently published in the International Journal of Nuclear Security.  You may download the paper for free here…

Here’s the abstract of the paper…

Ready access to abundant electricity is a key enabler of modern life. During the past decade the vulnerability of Critical Infrastructure sectors in the U.S. to a variety of natural hazards and man-made threats has become increasingly apparent. The electrical infrastructure (the “Grid”) is the foundation for all other critical civil infrastructures upon which our society depends. Therefore, protection of the Grid is an energy security, homeland security, and national security issue of highest importance. Geomagnetic disturbances (GMD) induced by solar coronal mass ejections (CMEs), electromagnetic pulse (EMP) attacks, and cyber attacks are three events having the potential to plunge the U.S. into partial or total Grid failure (de-energization) with subsequent blackouts so massive they are referred to as “Black Sky Events”. Embedded in the U.S. Grid are almost one hundred commercial nuclear power reactors in some sixty nuclear power plants (NPPs). This paper explores the nature of society’s coupled “system of systems” (i.e. Grid, other Critical Infrastructure, human operators of these infrastructures, Government, and the Public) that would be stressed by a Black Sky Event, and presents an analytical framework for probing the behavior of this system during Black Sky Events. The question of how NPPs might be impacted by a prolonged Black Sky Event, and what role, if any, NPPs can play in enabling a rapid recovery from a Black Sky Event is examined. The likely behavior of an NPP during a Black Sky Event is discussed, and it is concluded that today’s generation of NPPs are Black Sky liabilities. However, a unique characteristic of NPPs (the large fuel inventory maintained in the reactor) could make the NPPs extraordinarily valuable assets should a Black Sky Event occur. Their value in this regard depends on whether or not it might be possible to affect a number of changes in the NPPs, the U.S. Grid, and other Critical Infrastructure in the U.S. to enable the NPPs to become Black Start Units – generating stations that would be the foundation of recovering the U.S. Grid during a Black Sky Event. This paper poses the question, “Can today’s nuclear power plants be transformed from Black Sky Liabilities to Black Sky Assets, and if so, how?” An integrated framework for addressing this question is proposed.

The paper deals both with the current U.S. commercial nuclear power fleet, and future commercial power reactors large and small.

I hope it is a catalytic contribution to a dialog that needs to occur.